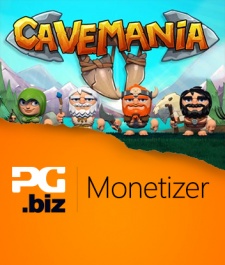 Reviews are a key element of consumer game sites. But they don't make much sense for a business-focused site like PocketGamer.biz, which is why we've come up with Monetizer.

It's our version of a review, which provides objective analysis of new free-to-play mobile games, specifically in terms of ranking their monetisation.

You can see previous columns here, and we're highlighting different techniques daily on our Tumblr page.

You can also read my handy explanation about how we calculate the numbers here.

Match me if you can

Developed by BonusXP - veterans from Age of Empires studio Ensemble - Cavemania brings a tactical twist to the match-3 gaming made popular by the likes of Bejeweled and Candy Crush Saga.

It's published by Yodo1, which previously was releasing western-developed games into China. Cavemania is its first global release.

You can read PocketGamer's review of the game here.

Released for iOS and Android in mid-September, the game is yet to find a paying audience.

In terms of our Success metrics, it hasn't ranked top 10 top grossing in any country chart yet, so has a score of 0 on all three platforms.

Viewed through the lens of our main Monetizer ranking, Cavemania is interesting as it combines three layers of monetisation technique.

In terms of a hard currency, it has gold, which is used to upgrade your units, but the transaction bands only range from $1.99 to $9.99 - much lower than the vast majority of games.

The game also has permanent and consumable items, each of which are purchased with real money.

For example, you can buy permanent items that increase specific resources at the start of each level. These range from $2.99 to $4.99, and include everyone's favourite - Double Gold.

You can also buy extra lives when you're out or request them from friends King-style. Finally, additional levels (15) are available for $0.99.

Despite this, crunching the numbers, the $9.99 maximum hard currency purchase transaction sees Cavemania scores a tiny 12 - the second lowest score ever recorded.

In comparison, we take 100 and above as our benchmark for a highly monetized game.

Finally, in terms of our Discount Currency ratio, Cavemania scores 1.3, which is low in comparison to other games (typically 1.3 - 1.8), but relatively high given we're making the comparison between a $1.99 transaction and a $9.99 transaction.