Is Kabam playing its card right? 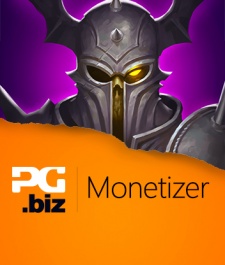 Kabam has had massive success over the past 12 months with mobile games such as The Hobbit and Fast & Furious 6.

Now it's releasing a lot more titles, particularly thanks to an aggressive shift into publishing. But it's also ramping up its internal projects.

One such is Heroes of Camelot; a card-battling spin-off from its city-building and PVP-focused RPG brand Kingdoms of Camelot.

Thankfully for players like me, it's a pretty simple in terms of its gameplay in which you grind through exploration quests using up your Stamina and picking up low level cards in the process. That's the basic core loop.

Then, every so often, you come across a boss battle. These are generally easy to win - it's just about which decks have the best combination of attack and health: there's no skill involved - and result in loot drops, including slightly higher level cards. They also use up your Mana.

Mana and Stamina are the game's two consumable resources; both recharge over time or you can buy them.

This requires the hard currency - Gems. Apart from the opening tutorial where you've given 210 to perform your first Summon - a good example of reciprocity - if you want Gems, you have to buy them.

This is the game's basic monetisation loop. Although you can use gems to get more Mana and Stamina (as well as other minor items), their main purpose is giving you access to high level Summons.

Each of these Summons costs 210 Gems (effectively $3 or can you get 11 for 2100 Gems), and gives you higher quality cards than you can grind. For example, you can grind a basic Summon through gameplay but the rarity of the card this gives you is capped at three stars out of five.

One interesting retailing decision worth noting in Heroes of Camelot is there's no currency discounting.

What we mean by this is that whether you spend $4.99 or $99.99, you get 70 gems for each $1 spent. This is unusual as most games - apart from those from DeNA - will give you more in-game currency per dollar spent the larger your IAP transaction.

Heroes of Camelot does, however, guarantee if you spend a lot of money, you will receive one higher level card as part of the IAP. For example, a $99.99 IAP will guarantee one of the highest rated five-star level card.

In terms of how you use cards, your hand consists of three decks, each consisting of four cards.

Obviously, you'll want to use the highest level cards you come across during the game in your decks, while minor cards are used to upgrade equipped card. You can also evolve (or fuse) identical cards to increase their value.

As well as the main single player campaign - which currently consists of 40 stages split into five in-game locations - there's also a PVP arena, although this is a limited mode that doesn't give worthwhile rewards and feels a little random.

Looking at the game through our Monetizer lens, as with many Kabam games, the minimum IAP transaction is $4.99.

Heroes of Camelot is interesting, however, in that it only has one hard currency (Gems) and doesn't attempt to retail in a particularly sophisticated manner.

Indeed, I found the way it structures high ranking card to IAP transactions of at least $29.99 positively off-putting in terms of spending lower amounts. Hence, I didn't actually spend anything in the game.

Putting the game through our Monetizer process resulted in a score of 150 for Heroes of Camelot, which was what the Kabam-published Puzzle Trooper also scored.

(Incidentally, Puzzle Trooper also uses a similar system to Summons in terms of providing the player with new units of different rarity.  I didn't think it worked there either.)

We treat any game ranking over 100 as being highly monetised.

In a big country

Finally, looking at the game's success, Heroes of Camelot hasn't been a hit in key markets such as the US, although it's performed well in South Korea, Germany, Russia, Italy and Spain [see App Annie].

To-date., the iPhone version has peaked at #129 on the US top grossing chart or #202 when it comes to iPad.

Because our Success score is purposefully skewed towards the US - the most lucrative market - Heroes of Camelot doesn't score highly.

Android = n/a as the game hasn't ranked in the top 10 top grossing charts in any country.

We treat any score over 0.01 as being a commercial success.

Having spent time playing several of Kabam's recent games, it's clear that while the company understands how to successfully operate and retail free-to-play games, many of the new games are not as well honed as the likes of Kingdoms of Camelot and Fast & Furious 6.

So while I've enjoyed playing Heroes of Camelot, its IAP system has actually put me off spending anything in-game. Neither does the game's limited multiplayer encourage any social interactions; something that's vitally important for retention and monetisation.