Rethinking the Clash of Clones 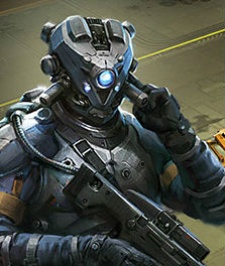 Over the past couple of years, Kabam has become a mobile gaming powerhouse.

MMOGs such as Kingdoms of Camelot and The Hobbit and another movie tie-in Fast & Furious 6: The Game have kept it glued to the top of the top grossing charts on iOS and Android.

Dark District marks a maturing in the company's output, however.

Released for iOS on 11 December 2013, it's an original IP, the first game from its San Francisco studio, as well as its first game in the mobile strategy genre dominated by Clash of Clans.

A clean approach to play

Dark District clearly draws on the genre's market leader in some ways.

Although it's sci-fi themed, you build and level up a base, train groups of troops which you use to attack other bases, both through the single player mission mode, and those of other players, and join Alliances.

There's a single hard currency which feeds into two soft currencies, one of which is used for base building (Alloy) and the other for training troops (Hexium).

There are some differences, though.

Although it's not a fully 3D game - there's a 2.5D feel to the camera - graphically the game is more advanced than many including Clash; something that also reflected in the user interface. In keeping with the game's theme, this is very clean, with all the necessary information displayed and only a minimum of sub-menus required.

Other innovations include more of a focus on upgrading your units through research, as well as a single building resource. This is both interesting in terms of gameplay and monetisation.

As we've previously pointed out, paying hard currency to unlock addition builders or construction units is a key monetisation technique for such games - the so-called 'Third Builder issue'. But because Dark District only allows you to build or upgrade one building at a time, its monetisation technique in this respect is about encouraging you to directly speed up building using the Credits hard currency.

Similarly, there's only one queue for training troops. You can't build additional barracks to parallelise the process.

This all feeds into a focus on attacking other bases rather than building up your own. Dark District doesn't provide a great variety in terms of buildings or units, neither does it have the incidental trees or bushes that you clean up in the hope of a hard currency drop. Like the UI, it's a streamlined game based around action.

Incidentally, Kabam also uses this system in its card-battler Heroes of Camelot; it's the only company we've seen which uses the model.

Another difference compared to Clash of Clash's IAP system is that Dark Districthas a cash-to-hard-currency ratio of $1-to-10 (at $4.99), up to 16 (at $99.99.). Most other strategy games uses a standard in the order of $1-to-100 hard currency units, which, psychologically at least, feels more generous.

One interesting additional monetisation technique used is that if you buy 240 credits - this can be as one single $19.99 transaction or multiple smaller ones - youll get a bonus of 50 Credits (worth $4.99).

Start of the process

Working our way though our other Monetizer metrics, Dark District has a Discounted Currency ratio of 1.6, which is fairly standard.

Its Monetizer score is 100; on the limit for our definition of a highly monetised game.

So, in that context, perhaps the most interesting metric is the game's Success ranking. Despite Kabam's strong presence in the market, the game's only been top 10 top grossing in four countries on iPhone and two for iPad.

Its best position in the key US market has been #244 on iPad (#264 on iPhone). This gives it a Success ranking of 0.0002. We treat 0.01 and above as a commercial success, so Dark District clearly has a long way to go on that score.

Of course, Kabam will argue that the game's only been out for a brief time, and that in a competitive period, but clearly it will have to gear up its promotional push - something that will likely happen as the game receives its first updates, as well as it's released for Android in early 2014.

Only then we will get a better idea about whether its streamlining of strategy mobile gameplay and monetisation will be revolutionary.