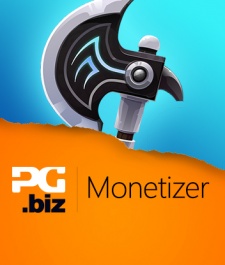 We recently took a look at Kabam's attempt to streamline the city/army-building mobile strategy genre in its Dark District.

Pocket Gems' Epic Empire: A Hero's Quest take a very different approach to the problem, however.

Still, at first glance, it might not seem too divergent.

Well presented in a cartoony 2D paper animation art style, you start out with a town area on which you construct buildings that over time provide you with two types of resources: gold and metal.

Surrounding this area are mysterious woods. You expand your town using your single playable character, who you send into the wilds to fight barbarians and unlock their territory in order to build on it.

Gameplay-wise, this happens very simply as you frantically tap on series of enemies to attack and defeat them, and then collect their item drops. There's very little skill involved.

You can equip dropped items or use them to level up your character's kit in four areas - weapon, helmet, armour and leggings.

As is becoming more common in F2P games, higher quality items can be evolved into higher forms. This requires you to max them out in terms of the basic levelling up process, then evolve the items, triggering yet another levelling up process for you to accomplish.

So far so RPG, but where Epic Empire takes an interesting approach is that you can't buy items. The hard currency - Starstones - are used to speed up buildings, to refill your energy meter, and buy rare items, the latter at the cost of 999 Starstones.

These are difficult to earn in-game - in two months of regular play, I've earned 637 Starstones - meaning that to get a rare item you effectively have to buy Starstones. 1,200 Starstones cost $4.99.

In order to alleviate this Pocket Gems has introduced Forge! token in a recent update, which enables you to buy lower quality items. But after initially dropping fairly frequently in combat, it appears to have tweaked their rarity.

The result is a game that's very focused on grinding through combat to get the items you need to level up your character and unlock more gameplay areas.

Some variety is provided in the multiplayer arenas, in which you take on other players' characters - again frantically tapping on them - but this only provides you with multiplayer-ranking crowns and some gold, which isn't very useful in the single player experience.

Further restrictions are provided as the ability to access new buildings is locked to your character level, meaning that unlike the city/army-building games where there's always something to do, in Epic Empire often there's little to do.

All-in-all then, the experience feels as if the gameplay and monetisation loops haven't been properly joined up.

So much for the gamer's point of view. Now let's consider Epic Empire though the Monetizer lens.

Epic Empire uses a non-standard 7-band IAP system (most games use 5- or 6-bands). This is because it has more low price points - notably $0.99 and $1.99 - although as previously mentioned, these aren't much use in terms of getting enough Starstones to forge rare items.

Still, for that reason Epic Empire has an average IAP price of only $26.85.

Its Discount Currency ratio is a standard 1.5, and you get between 202 to 300 Starstones per dollar spent, depending on the IAP transaction value.

Looking at Epic Empire's Success metric, it's struggled, going top 10 top grossing in 3 countries on iPhone and 4 on iPad. Its peak position in the US top grossing chart is #185 for iPhone. It's #354 for iPad.

The result is a Success score of 0.0004. We treat any game with a score of 0.01 or higher as a commercial success.

We treat any game with a score of 100 or over as being highly monetised.

Epic Empire is an interesting attempt to fuse an RPG with the mobile strategy genre but the gameplay and monetisation loops aren't well aligned, something that's reflected in the game's weak commercial performance to-date.