Comparing the monetisation efficiencies of Boom Beach and Clash of Clans 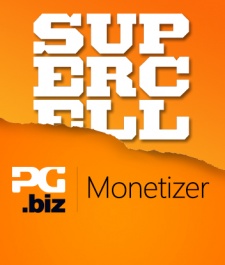 When Supercell labelled Boom Beach, its “risky” third game, it was hard to know if this was an example of arch Finnish wit, or just conventional Finnish humility.

Whichever, it’s now fair to say that the “risk” has paid off.

How successful is it compared to Clash of Clans, however?

In one key respect, the comparison can not yet be made. Clash of Clans  was released in the summer of 2012 and took many months to build up its audience.

Even fuelled by massive Apple promotion and the millions of dollars in Supercell’s user acquisition warchest, Boom Beach  hasn’t yet been a No. 1 top grossing game in any major western country.

Indeed, such is the success of Clash of Clans, Candy Crush Saga  and Game of War, it might be many months before it breaks that duck.

Yet, making the comparison between the two games is interesting.

As I’ve been musing over on the Moneti$er Tumblr site, I’m currently working up a new metric.

So let’s have a look at how Clash of Clans  and Boom Beach  stack up.

As we can see, for iPhone and iPad, Clash of Clans has a Popularity (DL) ranking of 0.15.

Surprisingly, this is because the game was never a total success in terms of peak downloads. It only reached the number 5 position in the US on iPad, for example.

However, when we consider Success (TG), it has a perfect score on 1 on iPhone and is almost perfect on iPad.

It’s a similar situation on Google Play, with a lower ‘download’ ranking (Google Play’s chart position is more complex than pure downloads, also looking at retention and churn), but an almost perfect Success ranking too.

The result is that when we construct our Monetisation Efficiency ratio, Clash of Clans  scores over 6.5 on iOS and 40 on Google Play.

(Note: because of the differences in how the iOS and Google Play charts are worked out, using this measure, we can’t compare across platforms, only compare games within platforms.)

Fighting on the beaches

That’s what Boom Beach needs to measure up to.

The first surprising thing to note is that in terms of Popularity, it ranks higher than Clash of Clans.

Note, I’m not saying it’s been downloaded more times. This is a ratio not a measure of absolute downloads. But Boom Beach  has ranked higher on more global iOS downloads charts than Clash of Clans.

Because top grossing position takes longer to build up, the game ranks lower, much lower than Clash of Clans, however.

And it's already higher than any other game released in 2014, as we'll see in future weeks.

Obviously, we’ll have to revisit this article in the coming months too, as well as looking at the game’s performance on Google Play, when the Android version is released.

This is important to point out, because - as I’ve always stressed - these Monetiser columns are more about building a process, or various processes, to help us analyse what’s going on both in terms of the app ecosystem as well as comparing individual games and companies.

In this case, we’re looking more at how the games perform in the app ecosystem, but we’ll also being doing a gameplay test of Boom Beach to make a direct comparison to Clash of Clans  in terms of monetisation techniques.

The In-App Purchase Inspector: Boom Beach storms onto the scene