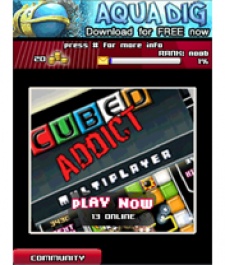 The service will let people play a series of games on mobile or from their PC web browsers, with plans to also launch them as social networking widgets in the future.

The first game launched through Dojo is Cubed Addict, a two-player match-three puzzler.

The service is live now and is the work of Dojo Media, a company co-founded by former Telcogames exec Jamie Conyngham.

Dojo is based on the multiplayer platform of former Telcogames subsidiary Viva La Mobile, whose boss David Kainer is now co-founder and chief technical officer of the new company.

"It's cross-platform, it's free and it's global," Conyngham tells PocketGamer.biz. "We haven't seen anything like it before. We've only had people playing on it for four weeks, but we're already seeing 10,000 sessions a day."

As his comments suggest, Dojo is free for players, at least in its basic incarnation. The company's business model is based on two revenue streams: advertising, and micro-transactions (for example, players paying to enter tournaments or buy in-game power-ups).

"It's like any MMOG [massively multiplayer online game]," says Conyngham. "We're running our own economy where you pay and get 'Coins' to get digital goods and enter tournaments. As it gets sticky, with people buying more Coins and entering more tournaments, they'll be exposed to more ads, as they'll be playing more."

The micro-payments are likely to be handled via a deal with a global premium-SMS provider, although Conyngham says PayPal is also an option.

Advertising-wise, Dojo Media is in talks with a couple of mobile advertising networks, but also hopes to sign its own deals with brands.

"We're more interested in doing bespoke advertising rather than just slapping an ad up as soon as you open a game," he says. "Brands can sponsor a tournament, and we can create animations that jump across the community screens, although not the game itself. We have a few brands interested, and some carriers too."

Dojo Media recruited players for the beta by seeding Dojo on various free mobile games websites, after which it was swiftly picked up by numerous pirated mobile games sites. "We didn't have to target the pirate sites," says Conyngham.

"They just picked up on it. We're getting traction already in countries like Russia, China and Indonesia, where all these blogs and pirate sites spreaded it really quickly. There's a huge percentage of people who don't want to pay for mobile games, so we're addressing that audience legally."

Viva La Mobile is creating the first games for Dojo, but Conyngham says the company plans to open its platform to external developers, or offer to port their games to Dojo itself as a proof-of-concept.

We'll be able to share the advertising revenues with developers, although obviously they want to see those revenues before committing their time and effort into porting their games to Dojo," he says. "That's why we'll port titles for a couple of developers, to show how it works."

Currently, Cubed Addict can be played on mobile or as a desktop Java game, but an important part of Dojo Media's strategy will be launching its games on Facebook and other social networks too.

Dojo will work on multiple mobile platforms, too. "We launched our Android application last week, and we saw a 400 per cent increase in our sessions-per-day in just 24 hours," says Conyngham.

"We're porting a version to iPhone probably in Q1 next year too. The second Dojo game, Badlands 2, will also be out early next year. I'd say we'll launch a maximum of four to eight games in the first year, as we don't want to spread our global users too thinly among the games."

Dojo is certainly innovative. The nearest comparison we can think of is French firm C4M's Playtomo service, although that's more about community features than real-time multiplayer.