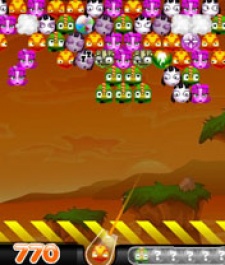 December 29th, 2008 - 04:32pm
By Stuart Dredge, Contributing Editor
Sticking advertising in games that have been available for a while can be a risky business, as Glu's iPhone title Space Monkey recently showed.

I-play is the latest publisher to catch flak from players, although in its case for the Facebook version of Bubble Town, rather than the mobile game itself.

It's been one of the most successful mobile game ports to Facebook, and currently has nearly 500,000 monthly active players on the social network.

However, players are up in arms about the game being tweaked to include a sponsorship from Duracell, with many taking to the game's official Facebook page to post 1-star reviews and rants.

"I am looking for other games to play now. Bubble Town sells out to Duracell. I don't even wanna use such low quality provider," says one angry player.

"THEY SUCK. I want you and this particular battery company to know that I will go OUT OF MY WAY to buy ANY OTHER battery in future," says someone who's even more enraged.

Ouch! It shows the tightrope publishers have to walk when incorporating ads and sponsorships into their games on any platform.

Meanwhile, we wonder, if the Facebook version of Bubble Town had been as successful as I-play has suggested at driving purchases of the mobile game, why they'd need to sign a seemingly intrusive advertising deal.