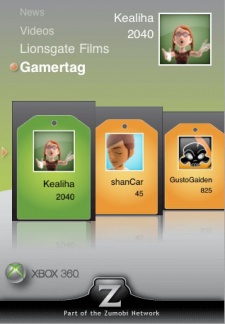 January 9th, 2009 - 09:55am
By Chris James, CEO
Mobiles have so many uses these days we sometimes forget theyre also able to make phone calls. But phoning people is the original social networking activity, and mobiles have simply expanded to incorporate all the different methods weve come up with for keeping in touch with each other.

The latest addition to our obsessive cyber-presence maintenance comes from Zumobi, which has developed an application for the iPhone, WinMo and BlackBerry that allows us to keep track of Xbox Live gamer tags and connect with Xbox 360 news and videos on the go.

The application mimics the look and feel of the new X360 dashboard, and even allows users access to Major Nelsons blogs and podcasts.

Xbox Live is becoming the social networking and multimedia system of choice for a great many people, with the added benefit of being accessible from the living room - and now its on our smartphones, its likely to grow exponentially. Stay in touch!