At least, that's what Nokia says 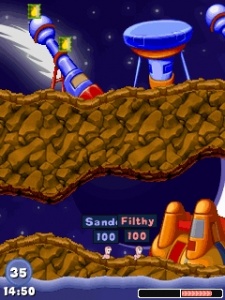 January 9th, 2009 - 12:11pm
By Stuart Dredge, Contributing Editor
There are questions about THQ Wireless's commitment to Nokia's N-Gage platform, with the news that production on the publisher's N-Gage title Worms World Party has been suspended.

The claim was made on Nokia's official N-Gage blog, saying that "production on that game has been postponed". A spokesperson for THQ Wireless tells PocketGamer.biz that the publisher has no comment to make, but stressed that THQ is still committed to N-Gage.

The choice of wording may be significant - THQ Wireless may be merely delaying the release of its game until more N-Gage capable handsets are in the market.

However, if the game is cancelled, the publisher has no other titles on the most recently published N-Gage release roadmap.