There's always been a dance mentalist element to their music 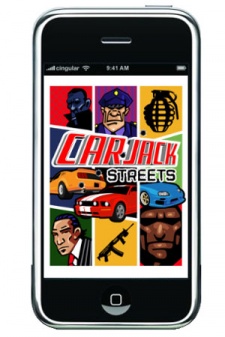 March 12th, 2009 - 12:38pm
By Stuart Dredge, Contributing Editor
TAG Games has revealed the soundtrack to the upcoming iPhone version of Car Jack Streets, its GTA-style action game. And it's good news for fans of Red Shirt Theory, The Amateurs and Atom tha Immortal.

Okay, so these aren't household names, but that's the interesting thing. TAG has opted to populate the soundtrack to its game with 24 tracks from 16 emerging acts, rather than paying big bucks to license in established artists.

Players will be able to click through to buy the songs from Apple's iTunes Store, too. Atom tha Immortal is a hip-hop wordsmith, apparently, while Red Shirt Theory is a "dance music mentalist", if you're wondering.

TAG boss Paul Farley tells PocketGamer.biz that researching which artists to include was partly TAG's own staff, and partly a relationship with an artist management company.

It's an interesting strategy, and presumably a more cost-effective one for TAG than licensing in marquee names. The fact that iPhone allows click-throughs to the iTunes Store is a welcome bonus, both for the publisher, the artists and players.