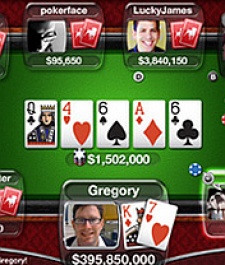 April 30th, 2009 - 04:05pm
By Stuart Dredge, Contributing Editor
These aren't officially-announced figures, so take them with a pinch of salt, but a Business Week article on social gaming claims that Zynga is coining it in from Facebook micro-transactions.

How much? $100 million annually. Not bad, eh? That's thanks to a significant chunk of its 40 million monthly active users paying for virtual poker chips and other items, or playing premium versions of its Facebook games.

The article suggests that 2-10 per cent of the company's player base pay, which means between 800,000 and four million paying customers.

Assuming the estimate isn't too wide of the mark, it has significant implications for iPhone. Zynga has already released several games on the App Store, but it hasn't been able to bring this micro-transactions model across.

Of course, once the iPhone 3.0 software launches this summer, Zynga and its social gaming rivals like Playfish and SGN will hope they can drive similar revenues from iPhone.