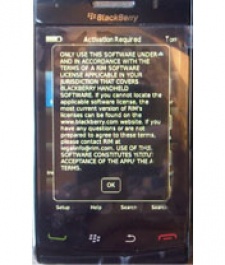 May 15th, 2009 - 11:29am
By Spanner Spencer
The BlackBerry Storm has apparently sold quite well, according to manufacturer RIM, though its life has been mired in complaints and talk of instability. Neither did it do itself any favours when it arrived without wi-fi, which everyone has been hoping will be rectified in the recently announced hardware sequel.

Which CrackBerry has just nabbed some leaked images of.

The Storm 2 is looking much more like an iPhone competitor now, with a far slimmer profile and its hard buttons built into the touchscreen as touch-sensitive icons.

Reports suggest the device will retain its GPS function, but now includes the much-needed wi-fi connectivity that was missing from the original Storm.

There's no indication as to when the Storm 2 might become available, but the hardware looks to be in good shape, so it might not be a very long wait.