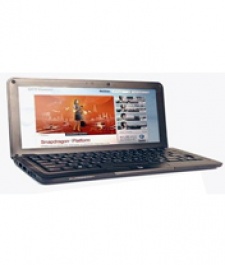 May 29th, 2009 - 10:32am
By Spanner Spencer
Qualcomm released details of its impressive new Snapdragon chipset last night, which combines all the vital functions for a new range of miniaturised, connected netbooks that the company is dubbing 'smartbooks'.

About 15 devices are already being built by various companies such as Asus, HTC, Toshiba, LG, Samsung, Acer, Compaq and more, with the Snapdragon technology at their core.

This new system packs a host of features into a single chipset, including 3G connectivity, a powerful CPU in the GHz range, GPS, multimedia capability (including HD encode and decode), wi-fi, 600MHz DSP, advanced graphics and a touchscreen LCD controller.

The main focus of Snapdragon is to enable a range of miniature portable devices with a full keyboard and larger screen than typical smartphones, though smaller than a netbook. These smartbooks, as they're beging called, will be always on (the same as a smartphone, so no boot up and shut down times) and will always be connected to the internet through wi-fi or cellular networks.

Because all the functions are contained within a single chipset, Qualcomm says a smartbook uses considerably less power - reducing costs thanks to a smaller battery size while allowing for eight to ten hours usage on a single charge.

And although this new system is aimed more toward a miniature laptop (or larger smartphone, depending how you look at it), it's also being considered by several companies (most likely HTC) for inclusion in a feature rich smartphone.

In terms of its operating system, Snapdragon favours the smartphone approach, with the Linux OS essentially 'hidden', and the smartbook's Home screen(s) being populated by widgets in a similar fashion to the iPhone.

Qualcomm expects its manufacturing partners to get the first range of smartbooks out onto the market this year, though price points will depend on factors such as mobile service provider subsidies - should the devices be bundled with a data package.

Regardless of the size of device the Snapdragon chipset powers, it's an impressive leap forward in packing such powerful features into a very small form factor, and could provide the grounding for a whole new generation of always on, always connected, power-friendly portable computing.

Now all we need are  the games. 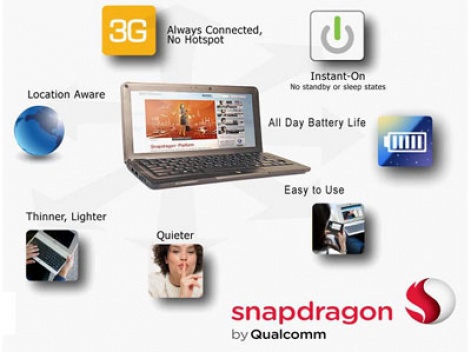