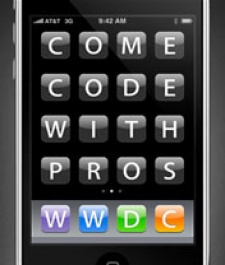 June 12th, 2009 - 11:26pm
By PocketGamer.biz Staff
Apple's WWDC show has just ended, and it's been a hugely positive one for iPhone games developers, who are leaving buzzing with ambitious plans to make use of the upcoming iPhone 3.0 software.

Well, it seems some are also leaving buzzing with annoyance, after the conference's final session. Check the Twitter chat: it seems that the session - titled 'Submit to the App Store' - didn't feature a Q&A session at the end.

Developers are understandably keen to ask questions about Apple's submission policies, which have been criticised for a lack of transparency in recent months. Denied this, developers have taken to Twitter to complain.

"There was no Q&A after the AppStore session. I've never seen a guy leave the stage so quickly," tweets one. "OMG! App store only session with no Q&A. Guy legged it like a hot snot," tweets another.

"unbelievable. no QA on the appstore session. #wwdc apple probably doesn't want a disaster to happen," tweets a third. They're not happy.

It's a shame to end the conference on a disappointing note, especially as earlier tweets indicate that many developers were attending the session in the hope of a feisty Q&A section.