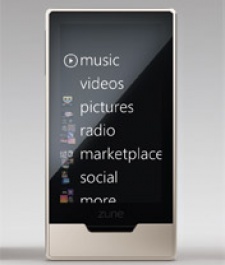 June 17th, 2009 - 10:16am
By Spanner Spencer
The new range of ultra-powerful, feature-laden, low wattage mobile-computer-on-a-chip devices, such as Qualcomm's Snapdragon and Nvidia's Tegra chipsets are big news at the moment as the electronics world waits to see the first portable devices to put them to use.

Rumours have been circulating regarding the innards of Microsoft's forthcoming iPod touch-killer, the ZuneHD, and which processor will drive it.

According to PC Perspective, one of its reporters was told by Nvidia staff at the beginning of June that the ZuneHD will indeed have a powerful Tegra processor at its core.

The Tegra chipset boasts a meaty ARM11 CPU, GeForce graphics processor, full HD video support (including encoding up to 720p and decoding up to 1080p), built-in wi-fi, up to ten hours of full HD video playback and 25 days of music playback, high-speed celluar connectivity and a host of hardware drivers all on a single slab of low-powered silicon.

If Tegra does indeed provide the beating heart of the ZuneHD, the iPod touch could be in for some brutal competition.

Reply
jon jordan
Hmmmm, all about cost I guess. Although September will be around the time the 3rd gen iPod touch is out... maybe
Posted 12 years, 11 months ago