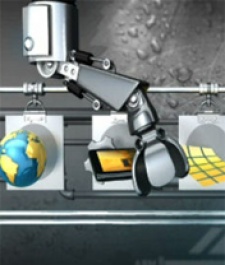 June 23rd, 2009 - 11:36am
By Stuart Dredge, Contributing Editor
LG Electronics has announced plans to use ARM processors in its next generation of digital TVs.

Specifically, it's using the ARM11 MPCore processor, and ARM Mali graphics chips. Why? Because of the trend for new TVs to be able to surf multimedia websites and install widgets.

However, this could present an opportunity at some point for mobile games developers who've been working with ARM chips in smartphones and gaming handhelds for some time.

There are plenty of challenges, of course. How would you sell games to run on ARM-powered TVs, and who would do it? How would you control them? And would the likely return outweigh the costs of development?

Even so, the trend for chips more usually seen in smartphones to start popping up in TVs is an intriguing one for mobile developers.

LG isn't the only manufacturer at it either: Samsung showed off a range of widget-running TVs at CES this year, which used the ARM11 processor.

This could be seen as a threat to devices like the Zeebo, a games console that uses Qualcomm's mobile hardware and distribution platform for gaming.

However, Zeebo's focus on emerging markets - where sales of cutting-edge Web 2.0 TVs aren't likely to boom for a few years yet - indicates that the threat is decidedly a long-term one.

Worth 3 Supercells: SoftBank gets back into the expansion game with $32 billion acquisition of ARM