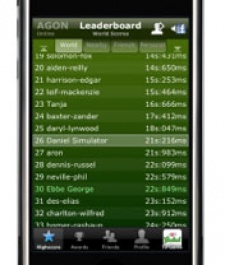 Aptocore has also rounded up some of its developers to compare it with rival platforms, who include OpenFeint, Scoreloop and Gamespy among their number.

"The other social platforms / leaderboards for the iPhone were lacking in certain areas - web only (thin client), feature-lacking, or otherwise difficult to work with," says John Moffett.

"AGON is free, integrates as native code, and looks great! The API is clean and well thought-out. Finally, the support is absolutely unparalleled and the AGON team welcomes and encourages suggestions for new features, and actually follows through!"

There's many more comments in the official announcement. It shows a couple of things: firstly that with such intense competition, these social gaming platforms for iPhone really do need to get their developer customers banging the gong for their unique features.

But second, it shows how the competition is making the companies behind these platforms innovate rapidly, adding new features to catch up with and/or pull ahead of their rivals.