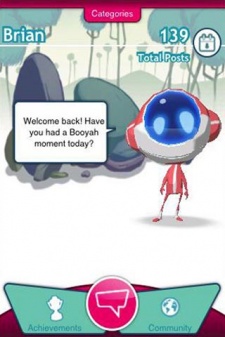 July 27th, 2009 - 09:01pm
By Stuart Dredge, Contributing Editor
US startup Booyah has released its first iPhone game, Booyah Society. It's an innovative and intriguing social game based around winning achievements for your real-world activities.

The company was set up by three former Blizzard Entertainment staff who'd previously worked on games including Diablo III and World of Warcraft. They raised $4.5 million of funding to explore mobile social games.
Booyah Society involves winning more than 100 achievements based on posts, activities and comments from friends. That includes so-called Booyah Moments - the branding is strong in this one...

The game ties in with Facebook Connect, so it's not a sealed-off iPhone community. And there are location-based features too, via a link with event database Eventful.

It's part game, part blog and part social network, and it's entirely free. As social games go, it's certainly more ambitious than the many, many text-based level-grinding sign-up-your-friends social titles on the App Store.

Which is something to be thankful for.