Oh, and collectible toys are involved too 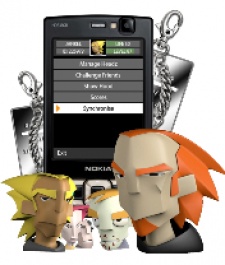 July 29th, 2009 - 10:04am
By Stuart Dredge, Contributing Editor
The boundaries are blurring between different gaming platforms and entertainment formats, and we've just heard about a game that illustrates that perfectly. It's called Gedda-Headz.

Due to be unveiled properly at the Gamescom 2009 show in Cologne next month, it's a massively multiplayer game - well, series of games - based around collectible Gedda-Headz figurines, which come with unique codes allowing owners to join the community.

There are 36 to collect, each with their own attributes when accessed within the mobile games, which will be available for Java handsets and iPhone / iPod touch. The games will be free, since Gedda-Headz will be presumably making its money from sales of the collectible figures.

The exact details of the game are still a bit hazy, but players will be able to sign up friends and take them on at multiplayer games to earn respect points. Street hockey is one game, while another is called Spark.

The friending process uses Bluetooth, seemingly to ensure people really are friends in the real world. However, a GPS feature will help players to find nearby Headz owners too.

There's a chat feature in the mobile games, and a website for users to manage their profiles, message friends and view game stats.

And the music? Well, there's a new hip-hop band called, yes, Gedda-Headz, who are releasing their first single next week - and they're tied in with this somehow. It's like Gorillaz, except with mobile gaming as the hook.

It's intriguing stuff, although obviously the games will need to be great for it to really take off. Linking a community with collectible figures has been tried by several online virtual worlds in the past, but not (as far as we're aware) by a mobile games firm.