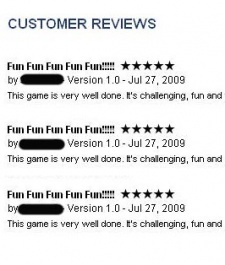 August 22nd, 2009 - 06:25pm
By Jon Jordan, Contributing Editor
As anyone who's looked at the first set of user reviews for any game on the App Store knows, they tend to be fairly black and white.

Anecdotally for example, Pocket Gamer knows developers of rival sports games who spent a lot of time earlier in 2009 slagging off each other titles with a spate of 1 and 2 star observations on launch.

Conversely, any developer worth their salt will try to ensure friends, family and even employees are quick off the mark to buy and report back in glowing terms the quality of any newly launched game.

Where to draw the line between such ad hoc self-protection and petty conflicts is perhaps best left as a matter of personal morality.

However MobileCrunch has accused US PR outfit Reverb Communications of something a little more premeditated.

Some diligent research then 'matched up' certain App Store 'reviewers' with positive 5-star reviews on games released by Reverb's clients.

Of course, this isn't illegal and could be seen as being part and parcel of the services PR companies are expected to provide. Frankly, we'd be amazed if Reverb is the only PR company that could be fingered in this manner.

"Our interns and employees write their reviews based on their own game play experience, after having purchased the game by themselves, a practice not uncommon by anyone selling games or apps and hardly unethical."

Make your mind up for yourself over at MobileCrunch, but if you're going to comment, please use your real name. It's only polite.