If this is real, Apple should be worried 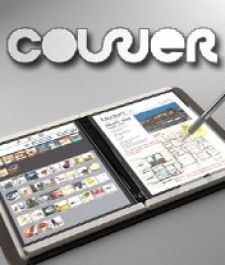 September 23rd, 2009 - 01:34pm
By Spanner Spencer
It's generally acknowledged that the next big techno-thing on the horizon is Apple's large form touchscreen tablet, but it seems Steve Jobs might be met with far stiffer competition than he's seen in a long time if Microsoft's Courier 'booklet' turns out to be real.

And according to Gizmondo, it is. The device is a twin, multi-touch 7 inch touchscreens, hinged in the middle very much like a book, leading The Vole to coin the term 'booklet', as opposed to tablet.

Which seems to be a perfect description for the Courier, which will apparently allow for both finger and stylus touchscreen control, with a single Home button in the way of physical actuators.

Apparently, the Courier is in the latter stages of prototyping, so could easily hit the shelves around the same time as the fabled Apple tablet. Suddenly, a large form iPod touch doesn't sound so impressive.