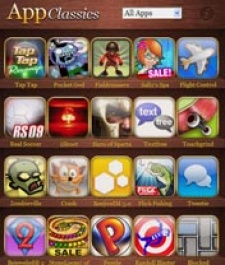 October 7th, 2009 - 10:49am
By Jon Jordan, Contributing Editor
As if iPhone developers didn't have enough to be getting on with, US studio NimbleBit has just launched its own App Store discovery website.

Called AppClassics, it takes information from Apple's official App Store and presents it in a more meaningful manner using its own concept of Classic Apps.

We caught up with NimbleBit's Ian Marsh to find out more about this side project.

Pocket Gamer: How do you think App Classic helps discovery for consumers when they can just look at the App Store charts?

Ian Marsh: If you look at the App Store charts at any given moment, you're only looking at a tiny fraction of the total apps on the store, really a drop in the bucket.

And many the apps in the top charts will start to slide back down after a few weeks, and even more after a few months. Over the lifetime of the App Store, many apps that have been well received by shoppers are now buried in the charts.

Instead of featuring the 'flavour of the week', App Classics is a test of how every app in the store has held up to the test of time. Some App Classics such as Flower Garden and Sneezies have never been featured products or chart toppers, but have built up a large number of positive reviews over their lifetime.

What metrics are you using to calculate your App Classic rankings?

App Classics uses a finely tuned formula in which the main factors are the number of ratings, the average rating, and the rating distribution.

How does the system work in terms of does it have a limited number of slots or can there be as many classics as pass the formula?

The limit is the top 50 classics in any category and there are 38 categories. Therefore the theoretical max is just under 2,000 but the real number is right now is much lower since each game can be a classic in two categories and many of the less active non-game categories have less than 50 classics.

You guessed right. The hope is we can run the site advertisement free from the affiliate revenue alone.

As a cynical journalist, I have to ask, how will you be dealing with the rankings of NimbleBit's games?

The entire process is automated and I don't boost the scores of any particular apps. Moon Drop, Hanoi Plus, and Bluebird sadly did not make the cut.

What plans do you have to expand the features of the site?

Spare time from our game development is in short supply these days, but I love the idea of users being able to flag certain apps as being owned, and then being able to display their personal shelf of Classics.

Point your mouse in the direction of AppClassics.com to see what all the fuss is about.