November 10th, 2009 - 05:17am
By Jon Jordan, Contributing Editor
The performance of Eliminate, the first proper freemium game on the App Store - continues to provide plenty of opportunities for amateur statisticians to get their teeth in.

One such was the game's first weekend: from Friday 6th to Monday 9th November.

Annoyingly though, following my previous Eliminate analysis, ngmoco decided to remove its stats revealing the total games played, number of kills per game and credits awarded per game from its website.

As can be seen - and is to be expected - the number of players at any time rises rapidly as the afternoon draws on.

(The time axis is US Eastern Standard Time, which provides mid point between the extremes of European GMT and the US west coast.)

Friday and Monday both saw player numbers peak around 16:00. Friday's activity steadily dropped off throughout the rest of the night as people started to enjoy their weekend.

However Monday saw another, later peak around 21:00, with a distinct fall off after this: something to be expected for a work night. 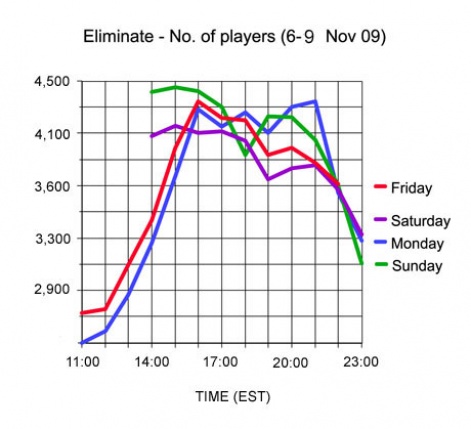 Surprisingly perhaps, over the weekend itself, Sunday saw more activity than Saturday, although both experienced a 'm'-shaped curve with peaks of activity in the late afternoon and mid-evening.

More generally however, all four days experienced broadly similar player numbers of over 4,000 for a period of over six hours.

Of course, considering Eliminate has been downloaded over 500,000 times this might not seem like a large number, but in comparison, a PC MMOG such as Eve Online has over 300,000 subscribers and around 45,000 concurrent users and that's for a game that people play for hours at a time.

In comparison, Eliminate bouts take a matter of minutes and unless players are willing to pay for extra power cells, they only get a dozen or so ranking games per day.

Indeed, ngmoco has designed this model to limit its exposure to server costs and hence limit the number of concurrent players at any time.

Equally important in this regard is the game's performance in terms of its position in the Top Grossing chart.

Obviously, this is more volatile than other conventional paid for games - with its position proportional to the number of players at any time - and impressively Eliminate remained within the US Top Grossing top 30 over the weekend, and spent plenty of time in the top 10, peaking at #2.