But what's going on with Tap Tap Revenge 3? 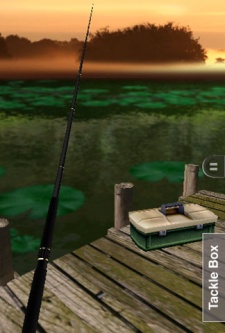 November 16th, 2009 - 04:19pm
By Jon Jordan, Contributing Editor
Celebrating a year of App Store success, Freeverse dropped the price of its 1.3 million selling Flick Fishing over the weekend from $1.99 to 99c.

It was smart move as such Peggling(TM) always gives a game a boost up the charts.

However in the case of Flick Fishing, the boost in terms of its position in the Top Grossing charts appears to have been even better than we'd otherwise expect.

It's easy to spot when we plot its position in the US Top 100 Paid chart alongside the other 99c games that appear in it and the US Top Grossing 100 chart.

Of course, 99c games have to sell a lot of copies to rank high in the Top Grossing chart, which consists of more of the expensive, branded games than the volume-based Paid chart.

You can see this is terms of the steep gradient of the purple line. Indeed, a 99c game has roughly be in the Paid top 30 to be selling enough to copies to creep into the Top Grossing 100.

The obvious outlier on the graph is Flick Fishing, which despite being #23 in terms of the Paid chart, is #54 in terms of the Top Grossing chart: a much higher position than we would otherwise expect. (It should rank around #75 in terms of the other 99c games, so it's up by 20 places or so.) 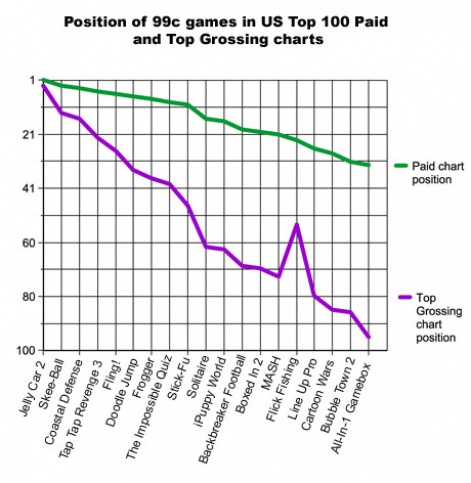 The only explanation I can think is its position in the Top Grossing chart takes into account the revenue generated from sales of in-app content in the shape of its 99c Private Beach pack; something Freeverse has already demonstrates occurs.

Indeed, as part of its birthday celebrations, it announced it had sold 70,000 packs since it was made available in June.

The further question this raises however is what's going on with Tapulous' Tap Tap Revenge 3. Also costing 99c, it supports the in-app purchases of new music tracks, costing either 99c or $2.99.

Reply
Dino Decespedes
Well halving the price about doubled sales, so no explanation there. The spike was due to DLC sales.

Reply
Jack Aidley
Surely the explanation for the grossing of Flick Fishing is that it has mostly sold for $1.99 rather $.99?
Posted 12 years, 7 months ago