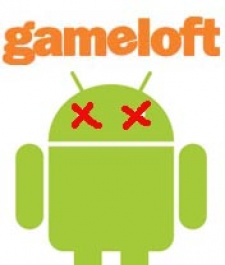 November 20th, 2009 - 04:40pm
By Jon Jordan, Contributing Editor
Hardware manufacturers might be falling in love with Google's robotic mobile platform, but it seems that app and game developers are finding Android a sterile place to do business.

Reuters reports that in an earnings calls with analysts Gameloft finance director Alexandre de Rochefort said, "We are selling 400 times more games on iPhone than on Android".

Around 13 percent of Gameloft's Q3 2009 sales came from iPhone, or around 4 million of revenue.

This suggests the second biggest mobile games publisher made around 10,000 ($15,000) from Android sales during the three month period.

In contrast, one estimate put the top selling Android game in October - Robo Defense by Lupis Labs Software - as grossing $22,724.

Small wonder then that de Rochefort revealed Gameloft was scaling back its development effort.

"We have significantly cut our investment in Android platform, just like ... many others," Reuters reported him as saying.

"It [Google Market] is not as neatly done as on the iPhone. Google has not been very good to entice customers to actually buy products. On Android nobody is making significant revenue."