Indeed, last week, its new strategic advisor Volker Hirsch told me addressing other mobile platforms was one of the first things he discussed when coming onboard.

Now however it's official. Scoreloop is supporting Android, with other platforms in development.

An extension of the infrastructure and toolset of the Scoreloop Core Social technology, it enables developers and publishers to integrate the same social gaming features Scoreloop already offers on iPhone for Android, device hardware compatibility withstanding of course.

Basically, this means that players of Scoreloop-enabled games on iPhone, iPod touch and Android phones will be able to communicate in terms of chat, and send challenges via push notification.

There will also be unified leaderboards, a single sign-in and combined matchmaking system. Scoreloop's virtual Coins currency goes cross-platform too.

The first game to support the technology will be Scoreloop's on free accelerometer-based Bug Landing, which is acting as a technology demonstrator.

Already out for iPhone [App Store Link], the way Scoreloop is constructed ensures backwards compatibility without an update being required, so challenges between players in terms of the number of bugs they can land on the flower will be available when the Android version of the game is released. 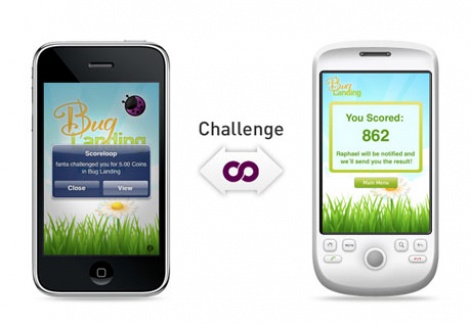 And the first commercial publisher to go live with the service will be Indiagames.

Scoreloop offers its Core Social and Premium Integration Services for free to developers and publishers. Its business model revolves around referral revenues and a cut of Coin purchases.