December 28th, 2009 - 10:17am
By Jon Jordan, Contributing Editor
According to MobileCrunch, mobile analytics company Flurry is reporting a massive jump in game and app downloads for iPod touch owners on Christmas day.

With Christmas Day downloads from iPhone normalised as 1, iPod touch downloads jumped 2.5 times; the first time that downloads for the device have been larger than for iPhone.

Up to this point it was thought there were more iPhones than iPod touches, although this may have changed depending on how many touches were given as presents.

It's a change that could be significant in 2010 too, as iPhone touch owners tend to be younger, more active in terms of downloads, but also more price sensitive than iPhone owners. 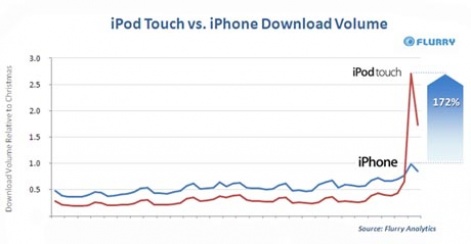 In addition, MobileCrunch says Flurry reckons iPod touch download volume jumped by nearly 1,000 percent on Christmas Day, while overall, the App Store saw a 51 percent increase in downloads from November to December, compared to a 15 percent increase from October to November.

The Android Market saw a 20 percent increase in downloads in December, with Motorola's Droid accounting for the bulk, with 49 percent of downloads.

Still, 13 times more apps are sold on the App Store than the Android Market, so Google still has some way to go to encourage developers it's a viable business opportunity.