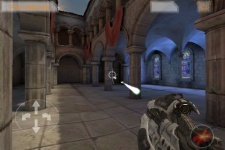 January 11th, 2010 - 03:57pm
By Spanner Spencer
This year's CES hasn't really blown the critics away, but one or two items have garnered more than a little attention. Not least of all being Epic Games's Unreal Engine 3 being demonstrated running on an iPhone 3GS and an unidentified Tegra 2 powered tablet.

A basic level from Unreal Tournament 3 was apparently on offer, and while it didn't really bring the scope of gameplay into focus, the graphics engine pushes Apple's platform to new levels of graphical detail - though it now seems apparent that it's destined only for the 3GS and third generation iPod touch.

Reports are also coming in of Epic demonstrating the framework running on a new Tegra 2 powered tablet device, which seems to have been put together to show off the impressive portable chipset. The device apparently worked with the Apple wireless keyboard and mouse, however, so chances are this was a sideways glance at some hot now portable gaming hardware that's looking for the right software to partner with.

It's also suggested that Nintendo is going the Tegra route, and although it's unlikely to be a tablet device the Unreal Engine 3 demo proves that portable power gaming is only a stone's throw away.

Reply
Kevin
Nah seriously, I am a 3D buff, this was the best 3D engine on 3.0 I have ever seen. It was really a pleasure to see. There are moments in my career when I look at something technically and I get excited like when I first got into the biz.
Posted 12 years ago

Reply
Kevin
The epic guy showed it to me in the hard rock hotel and either the vodka was very good or that engine is WTF good.
Posted 12 years ago