Noel Llopis of Snappy Touch on the rise, fall and rise of Flower Garden 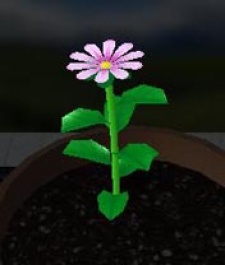 January 15th, 2010 - 10:57pm
By Jon Jordan, Contributing Editor
As we seem to be pointing out on a regular basis, there's a growing community of iPhone developers happy to share their conclusions about operating in the crazy world of the App Store.

The latest - and one of the best and most detailed to-date - comes from Noel Llopis of Snappy Touch.

The bottomline is it's generated net income of over $21,500, which works out at $13.44/hour, which as Noel points out doesn't even count as an entry-level salary in California.

What's more significant is the way he breaks down the various stages of Flower Garden's sales curve from the initial peak, to various other localised peaks and troughs relating to events such as Mother's Day, referrals from Harbor Master via the App Treasures website, and Facebook integration. 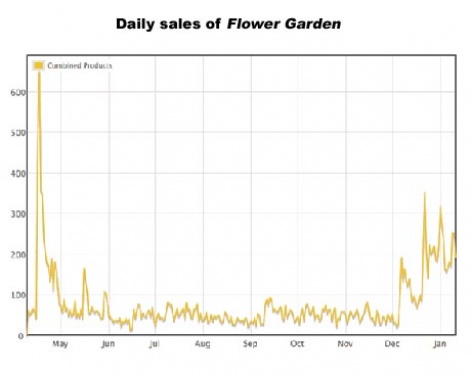 And where the story - and the graph - really picks up is following his recent integration of in-app purchases.

"To be totally honest, I wasn't expecting very much," Noel says. "But I thought it would be a good experience and if I only spent a week on it and made $1,000 I could call it even."

The result was daily revenue rose from around $50/day to closer to $200/day, with people upgrading to the full paid version of the game from the free version (the yellow part of the graph below) growing in importance. 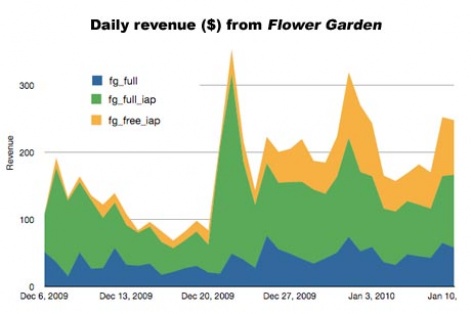 Anyhow, this is a summary of Noel's detailed post, so head over and read the source at Games from Within.