EA's Travis Boatman: select games will be better on iPad 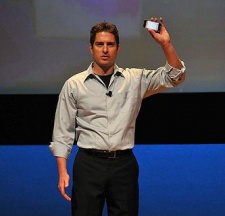 January 28th, 2010 - 10:41am
By Tracy Erickson
The only thing faster than EA's iPad enhanced version of Need for Speed: Shift was the crack team that put the demo together.

Among a select group of game publishers asked to work with device two weeks proceeding Apple's presentation on Wednesday, EA vice president of worldwide development Travis Boatman told us the time invested in creating the slick-looking demo was surprisingly small. "I was honestly surprised what was possible in two weeks."

Little more than 14 days was all EA had to get the game running on iPad with new features including a multi-touch gear shift, improved graphics, and rear-view mirror that can be tapped to view what's behind your speeding car.

"There's going to be a gentle learning curve," he explained. The similarities to the iPhone and iPod touch development ecosystem make it easy to venture on iPad. That won't take away the challenge, though, of devising innovative mechanics and clever new game ideas.

Boatman believes in the potential for a shift in how some genres are approached because of the unique features of iPad. "Some games will just be better on iPad thanks to the larger screen and the sophistication gained with multi-touch on that large of a device."

He marked out Scrabble as a prime example of a game that was accessible on iPhone, yet even better on iPad. The ability to lay an iPad on a table and have friends gather around for a game, he described, is a new way to enjoy board games. The bigger screen supports that in a way that iPhone and iPod touch just can't.

While Boatman wouldn't show all his cards to us with regards to EA's slate of titles for the iPad launch in March, he did assure us that several titles are in development in addition to Need for Speed: Shift.