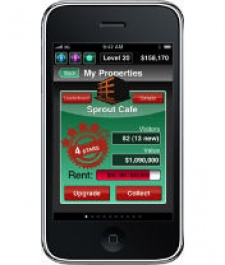 February 12th, 2010 - 04:26pm
By Keith Andrew
The race to become the most popular location-based social app has taken another turn, with TechCrunch reporting that Booyah's MyTown has hit 1 million registered users across the United States.

That puts MyTown ahead of rivals Foursquare and Gowalla and represents significant growth, MyTown having only passed the 850,000 mark at the start of February.

It's reportedly picking up an average of 100,000 new users every week.

The company also claims that MyTown users have checked-in at every single US location on Google Maps at least once.

MyTown's stats release comes just days after rival Foursquare revealed its service is enjoys more than 1 million check-ins a week; its claimed uptake running at an average of 100,000 users a week too.

Meanwhile, relative newcomer Gowalla is in the process of garnering developer support by releasing its API.

The battle between these three players certainly has some time to run  and, as we reported earlier this week, the competition is being conducted under shadow of what would happen if Facebook entered the market.

But Booyah is currently focused on making sure its new wealth of users actually spend time connecting with the service.

"More than the number of users... what we're really excited about is the growth in engagement," Booyah CEO Keith Lee told PocketGamer.biz.

Further engagement encourages interaction, Booyah stating that more than 40 million virtual items are consumed within the network each week.
MyTown's ability to stimulate such forms of in-app revenue is likely to prove increasingly important as this relatively new genre moves forward.