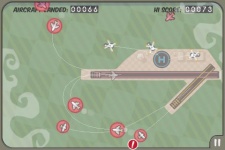 February 16th, 2010 - 02:01pm
By Keith Andrew
The ability to serve up a major player in the mobile market no longer hinges on the strength of the hardware alone but also the software its manufacturer is able to court to develop on it.

Currently, no-one can hold a candle to the App Store, the sheer number of titles streaming onto the service each and every week putting it well ahead of the pack.

However, snaps of Microsoft's new Marketplace for Windows Phone 7 suggest the company intends to make a serious mark on the market, challenging Apple both in terms of content and design.

Headlining the shots is Firemint's multi-million selling iPhone hit Flight Control, its very presence suggesting Microsoft has gone some way in tempting some of the studios credited with fuelling the App Store's success over to Windows Phone 7.
Flight Control has been something of a poster boy for the App Store since its launch this time last year and, although it is also DSiWare bound, it remains a prime example of the addictive gameplay iPhone is known for.

Other apps capture in the shots, like Facebook, are less unexpected, but it would seem Apple is Microsoft's main target, popular iPhone restaurant recommendation app Urbanspoon also featuring in the pictures.

Apps aside, the very design of Windows Phone 7 has come in for much praise, commentators focusing on the UI's ability to make the information feel like a fundamental part of interface itself.

The design of Marketplace, which had remained under wraps until now, has much the same feel, its clean and crisp yet functional look retaining many elements initially seen in Windows Media Center.