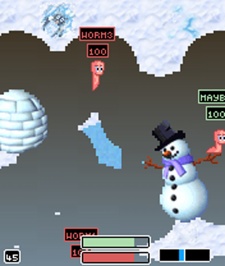 February 18th, 2010 - 01:31pm
By Keith Andrew
As part of a three-way deal with THQ Wireless and Team17 Software, EA Mobile has confirmed that it has picked up the Worms license, giving the publisher rights to all past and future releases in the series on mobile.

The move has long been common knowledge, talk that EA was interested in a deal having emerged back in April last year.

Team17 previously had a similar agreement with THQ Wireless, but the publisher has reportedly handed control over to EA as part of a wider restructuring that will see it focusing on 'high-end' portable devices.

EA Mobile has already released its first title following the link-up. Worms 2010 launched earlier this month, but the company will now also publish and promote previous releases in the series, such as Worms 2008, Worms 2007, Worms Forts 3D, Worms Crazy Golf and Worms 2.

"At EA Mobile we are great fans of the Worms series and are pleased to be able to expand the hugely successful franchise with new exciting content as seen in the all new Worms, and make it available to a larger fan base around the world through more channels and in more countries than ever before," says EA Mobile's VP of publishing, Luca Pagano.

The deal only grants EA access to standard mobile releases, Team17 holding on to Worms games on iPhone and iPod touch - as was the case with THQ. However, the developer believes EA's brand power and reach could push the series forward overall.