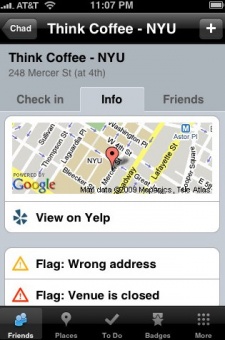 According to an entry on the company's work blog, Foursquare states that it is more than aware of the potential pitfalls for users who are a little too loose and free with their information.

The discussion was kicked off by Dutch website PleaseRobMe.com, which collated Foursquare posts published on Twitter that suggest the user in question is out of the house. Though not advocating robbery, the site's creators said they wanted to highlight the downside of the social-app boom.

Foursquare, however, believes its users are competent enough to manage just who has access to such data themselves, pointing out that those signed up effectively have complete control over who can and cannot see their movements.

"For those of you who are Foursquare users, you already know that only your friends get to learn about your whereabouts," the company states.

"On top of that, Foursquare only knows where you are when you decide to tell us. True, a large number of Foursquare users send their check-ins to Twitter and/or Facebook, and therefore make their location available to an audience much larger than just their Foursquare friends.

"The benefits are obvious, though it is interesting to see people talking about the potential downsides."

Indeed, as we reported yesterday, any security risk is not actually caused by Foursquare itself, but rather users allowing the network to make automatic posts on other social networks.

Foursquare - and many of its rivals - require users to approve any 'friend requests', giving them total control over who can see their movements.

It's only when data from the app is then posted on an open Twitter account that the information then becomes public knowledge. This isn't a fault in Foursquare itself, but rather a collective oversight by many of its members.

"We definitely 'get' the larger issue here - location is sensitive data and people should be careful about with whom and when they share it," the company concludes.

"At Foursquare, we do everything we can to make sure that our users know with what people and social sites they are sharing their location with."

Reply
None of users actually do that. Most of them are not interested in options of apps. From my point of view, the problem of security will hang on all the time. We can see it on facebook. There is some filtration of the visibility, but no one cares about it, because it is set up implicitly to "all" and casual users do not pay any attention...
Posted 12 years, 4 months ago