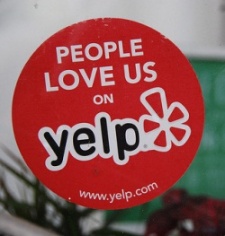 February 25th, 2010 - 10:05am
By Spanner Spencer
The local shop and business review application for the iPhone, Yelp, has come under criticism before for allegedly contacting business that have been reviewed on its application, offering to remove the negative comments from users for a monthly fee - something the company aggressively denied.

Now it seems the Yelp operator will have to make those denials in the court room, after two separate law firms have filed lawsuits against it for the same reasons.

According to a report on TechCrunch, Yelp representatives have been repeatedly contacting businesses asking for $300 per month to remove negative reviews and comments about them from the application.

The lawsuit alleges "unscrupulous sales practices" and accuses Yelp of running an "extortion scheme". The application developer recently received as much as $25 million in investment from Elevation Partners, and after apparently walking away from a Google buyout.

A Yelp representative said the "allegations are demonstrably false, since many businesses that advertise on Yelp have both negative and positive reviews. These businesses realize that both kinds of feedback provide authenticity and value. Running a good business is hard; filing a lawsuit is easy. While we havent seen the suit in question, we will dispute it aggressively."