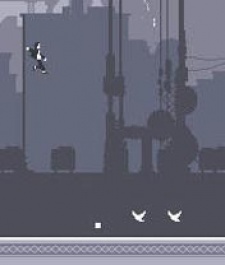 March 10th, 2010 - 10:14pm
By Jon Jordan, Contributing Editor
One of the most significant iPhone games of 2009 was indie start up Semi Secret's 2D run, jump and falling death game Canabalt.

"We couldn't be happier with Canabalt's performance," he explained during his GDC 2010 talk.

"Our price was the most controversial thing. Almost every review on the App Store has mentioned it. It's very polarised in terms of positive or negative though."

In particular, Johnson said that they thought about dropping the price to 99c when the game peaked at #36 in the US paid App Store.

"We didn't, and while Canabalt is now outside the top 100, we're still making decent money from it."

Another subtle point Johnson made was that the kind of people who buy games at 99c, compared to those happy to pay $2.99, is that you have many more support issues and more one-star reviews on the App Store at 99c.

In terms of making the game, the original Flash version of Canabalt was made in 5 days, while the iPhone version was ported in two week and written completely in Objective-C.

This genesis meant a free Flash version of the game was available online as a try-before-you-buy option. This drove sales rather than canabalising them, although it did have implications in terms of bandwidth costs, as the game got 190,000 hits when launched.

Linked to this, Semi Secret used Twitter to drive viral attention and sales of Canabalt. Its website got over 41,000 link backs from the tweets of people playing the game.