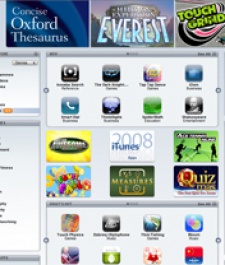 March 23rd, 2010 - 08:56am
By Keith Andrew
Following the set-up first pioneered with iTunes, Apple has updated the App Store to include gifting, allowing one user to send an app to another.

Unsurprisingly entitled "give a gift", the new system promises to up the amount of revenue taken by popular apps, the previous routine of buying physical iTunes vouchers from the high street potentially superseded by this new set-up.

Users wishing to utilise the new function simply have to click on the drop down menu below the app icon in iTunes, although free apps - naturally - can't be gifted.

There also doesn't appear to be a way of sending gifts from the App Store on iPhone or iPod touch, either.

The new set-up was spotted by avid iPhone blogger Rana Sobhany, the author of Marketing iPhone Apps claiming it's a positive move by Apple that should benefit all parties.

"On the iTunes side, music gifting has become very popular since it was implemented, particularly related to music discovery among friends, and I believe that this behaviour will continue into the application space as well," she states on her blog.

"Over the past 619 days, I've watched Apple make mistakes, developers retaliate against them, and Apple struggle to keep up with demand.

"While developers and those in the media are quick to complain, I tend to side with Apple regarding scale issues. Apple could never have predicted the level of popularity the App Store would achieve in such a short period of time."

It should also benefit the review system, publishers able to 'gift' their titles to iPhone based website, putting the App Store on a par with the set-up enjoyed by Java games.

However, one potential stumbling block is the fact that gifts can only be made to users within your own country, meaning publishers in the US looking get UK based reviews (or, indeed, vice-versa) may fall foul of Apple's current rules.

In Sobhany's view, it's just one potential pitfall of many already realised on the App Store.

"I think that the iPad will again push Apple to the brink before innovating on the store, but 18 months from now, we'll still be using the App Store to discover and download applications."