But Esquire thought to be planning $2 saving for digital edition 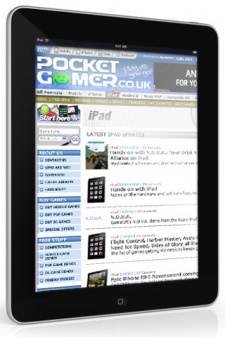 March 25th, 2010 - 02:04pm
By Jon Jordan, Contributing Editor
While game studios are frantically getting their iPad apps into Apple approvals in the hopes of getting a 3rd April launch slot, the publishing industry has even more riding on the supersized screen.

Many of the largest companies will be heavily supporting the launch, and are working on pinning down their strategies as well as their advertisers across print and digital editions.

According to The Wall Street Journal, Time magazine has signed up the likes of Unilever, Toyota, Fidelity Investments for about $200,000 apiece for a single ad spot in each of the first eight issues of the magazine's iPad edition.

Advertisers in Wired will have to buy eight print pages to gain access to its iPad version.

It's the ability to do interactive advertising that's really exciting the industry however, with Sports Illustrated demonstrating its iPad app to potential clients with an arcade-style driving game using the its accelerometer for control, plus a link out to customisation and purchasing options.

What will be really significant for consumers however is how publishers decide to price their iPad versions.

Apparently Men's Health will offer some free content, but full access will be the standard $4.99 per issue newsstand price, while Esquire is thought to be going for $2.99; a saving of $2 over print.

As for the business-focused Wall Street Journal, it's planning to charge subscribers $17.99 a month for its daily iPad subscriptions