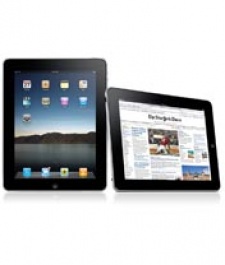 March 29th, 2010 - 06:51pm
By Keith Andrew
Apple has revealed that iPad will hit the shelves in 221 Apple Stores and "most" Best Buy outlets across the US when it finally makes its debut on April 3rd.

The firm is also set to offer in-store purchasers a free personal set-up service, allowing newcomers to get to grips with setting up their email and downloading software from the App Store.

"iPad connects users with their apps and content in a far more intimate and fun way than ever before. We can't wait for users to get their hands and fingers on it this weekend," said Steve Jobs, announcing the news.

The link-up with Best Buy comes as Apple's Asian suppliers have upped their shipment forecasts for the calendar year 2010.

Morgan Stanley's Katy Huberty has told CNN Money that forecasts are up from an initial 5 million plus units shipped to retail to between 8-10 million iPads hitting the shelves within its first 9 months.

Those outside the US will have to wait for their respective launch date to become part of that 6 million, however.

MobileGamesBlog.com is reporting that Apple has clamped down on pre-orders made outside of the US.

Websites such as MyUS, Borderlinx and Shipto have begun emailing customers to inform them that their orders have been cancelled due to Apple deploying "sophisticated means to detect any order that would be delivered to consumers outside the US".