March 30th, 2010 - 01:59pm
By Keith Andrew
Directly linking the App Store to the world's largest social network, Apple has partnered with Vitrue to launch an official page for the marketplace on Facebook.

The page, which anyone can become a fan of, connects users and highlights apps currently topping both the paid and free charts.

Fans can also directly search the App Store from the page itself, the option to purchase redirecting them to iTunes' web-based preview portal.

It's a logical move for Apple as it intends to expand the App Store's reach with the launch of iPad next month. 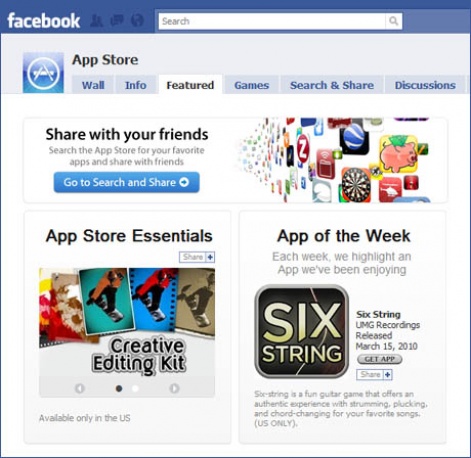 Match made in heaven

The company called upon community branding specialist Vitrue to develop the page, the firm itself revealing its launch via a blog post.

"With more than 170,000 apps available in the App Store and with more than 3 billion downloads, bringing the incredibly popular App Store to Facebook was a perfect fit," Vitrue said on its blog.

"Both the App Store and Facebook are currently two of hottest application development platforms today, so bringing the two together is a match made in heaven. People love their apps and nowhere are they better able to express these feelings than Facebook."

Though entirely viewed within the confines of Facebook, Vitrue has managed to deliver a surprisingly coherent App Store experience through the page, retaining both the look and feel of iTunes  albeit in a slimmed down form.

Most importantly, however, users are able to share their App Store likes and dislikes with any of their friends on Facebook.

Such implementation mirrors the App Store gifting service Apple recently launched, which enables users to pay for and send apps to their friends.

As a result, both set-ups mean studios don't have to rely on traditional and often expensive forms of advertising to propagate take up of their apps. Rather, the App Store is increasingly becoming a service where severe momentum can be built through word of mouth alone.