May 13th, 2010 - 05:35pm
By Keith Andrew
In the story that just keeps on giving, Adobe has officially replied to Apple CEO Steve Jobs' assertion that Flash is a closed and unreliable system.

The ad is naturally designed to garner the most attention, first stating that Adobe "hearts Apple", but also making it clear that the firm doesn't love "anybody taking away your freedom to choose what you create, how you create it, and what you experience on the web". 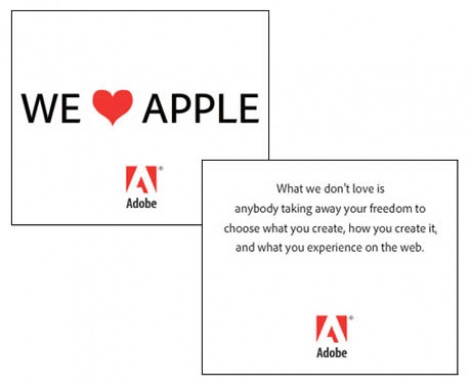 The letter, attributed to founders-turned-chairmen Chuck Geschke and John Warnock, carries a similar sentiment, claiming Abobe is concerned about the amount of control Apple now has over what users can and can't see on the internet.

It also believes Apple's stance may well crush the kind of creativity currently blooming on its platforms.

"When markets are open, anyone with a great idea has a chance to drive innovation and find new customers," the letter states.

"We believe that Apple, by taking the opposite approach, has taken a step that could undermine this next chapter of the web - the chapter in which mobile devices outnumber computers, any individual can be a publisher, and content is accessed anywhere and at any time.

"In the end, we believe the question is really this: Who controls the World Wide Web? And we believe the answer is: nobody - and everybody, but certainly not a single company."

Naturally, both the ad and letter are in reference to Apple's decision to change its developer agreement  which essentially outlaws the use of Flash-based tools in any app's development  and the continued lack of web-based Flash support on iPhone.

In his own account, Jobs suggested Apple and Adobe had enjoyed a successful and close relationship in the past, but that Flash operated best in an era now long gone.

Jobs is a keen advocate of the emerging HTML5 standard  naturally supported on iPhone  having used his open letter to push it as Flash's spiritual successor.