Distimo: Paid games stay in the charts for 18 days longer than free games

June 2nd, 2010 - 05:38pm
By Keith Andrew
Given the huge daily download numbers generated by free apps, it's no surprise to discover that free games chart for far shorter periods than paid-for titles.

The exact details have been worked out in the latest report published by Distimo, which looks at the performance of apps of all genres across a six month period between November 2009 and May 2010.

The statistics suggest, on average, paid games managed to hold onto their position within the US top 100 for 39 days. By comparison, free games could only manage to stay within the top 100 for an average of 21 days. 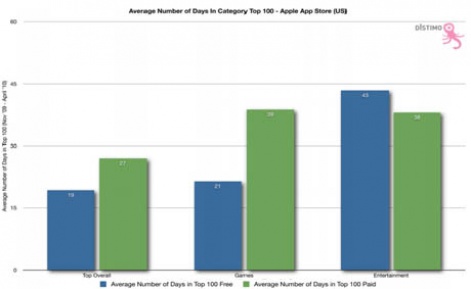 Indeed, Distimo claims this behaviour isn't restricted to games, as free apps fail to chart for as long as paid apps too, with the average free app falling out of the top 100 after 19 days to an average of 27 days for paid apps.

Only in the entertainment genre is the situation reversed, with free titles lasting for 5 days longer than those that charge on average.

In terms of specific games, Lima Sky's Doodle Jump was the top performer, with Distimo's figures placing it within the top 5 for 140 days.
Skee-Ball from Freeverse holds the record for longest run at #1, however, taking the top spot for 24 days. 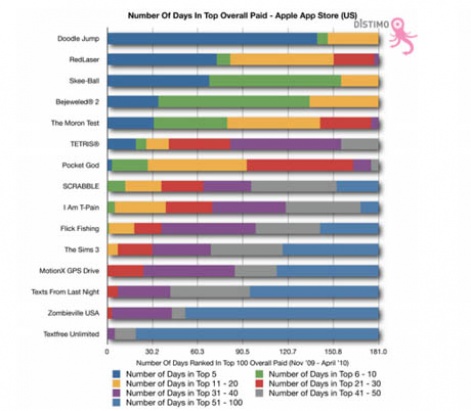 Comparatively, the top performing free game chart-wise across the period was Paper Toss from Backflip Studios.

The free app held its top 5 position for less than 7 days, falling into the bottom half of the chart after less than 130 days.

The report can be downloaded in full from Distimo's website.