June 15th, 2010 - 01:43am
By Keith Andrew
Official sales figures might be hard to come by, but analytics firm Quantcast believes web usage statistics taken in North America in May help to paint a picture of Android gaining momentum at its competitors' expense.

According to the firm's May mobile share statistics, iPhone remains the most popular OS across the States based on web consumption, with a share of just under 59 percent.

However, this represents a major drop when compared to figures from January last year, when Quantcast claims Apple enjoyed a share of just under 80 percent.

So, which platform is making the major gains?

Quantcast states Android has consistently been on the up since the latter half of last year, with the OS now holding almost 20 percent of the market.

That represents a slow, but steady rise across the same period, with its January 2009 figure having sat at around 6 percent. 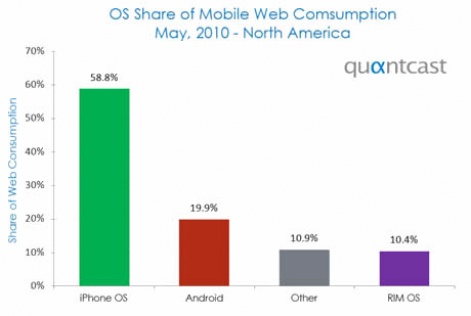 "Android continues to capture more share, and if the recent launch of the HTC Incredible on Verizon and Sprint's HTC Evo 4G is anything to go by, Android will continue to rapidly gain share," the firm says on its blog.

"In the past year Android has taken market share from all parts of the market, and noticeably so from Apple's OS."

Interestingly, despite coming top across most US based sales lists, Quantcast reckons BlackBerry handsets account for just 10.4 percent of all mobile web consumption.