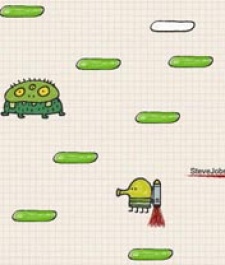 June 25th, 2010 - 06:30pm
By Jon Jordan, Contributing Editor
The battle to be the top selling game on the App Store has taken another twist with Doodle Jump, the first title to three and four million sales now ranked as the first to five million.

A friendly rivalry has built up with Angry Birds, which developer Rovio thinks is now out selling Lima Sky's tilt-based platformer.

But with a headstart in terms of time on the App Store, not to mention high profile backing from the likes of Jimmy Fallon on Late Night, The Big Bang Theory, the Jonas Brothers and Andy Murray, it's The Doodler who's broken the next million barrier.

Spring in his step

"We are thrilled to see how much Doodle Jump means to millions of Doodle Jumpers around the globe," noted Igor Pusenjak, president and co-founder of Lima Sky, who has recently been profiled by Fast Company as #14 on their annual list of the 100 Most Creative People in Business.

"@BillCorbett recently tweeted that 'Some families connect through their faith, their shared history, or their love of nature. For us, it's Doodle Jump'. It is comments like these that really touch us and provide inspiration for my brother and I as we continue to build Doodle Jump's evolving world."