June 30th, 2010 - 12:30pm
By Keith Andrew
The latest Mobile Metrics report from AdMob is something of a clean sweep for Apple, with the network's numbers illustrating the apparent domination of iPhone and the iOS family across the course of May.

According to AdMob's figures, based on traffic through its mobile ad network, Apple devices account for 30 percent of global traffic, with iPhone on top in North America, Western Europe and Oceania.

Close behind is Nokia on 23 percent, with activity largely being generated in Africa, Asia and Eastern Europe. 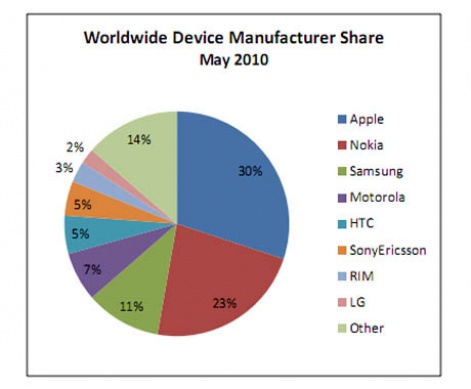 An OS for all

Apple holds an even larger lead in terms of OS share, with iOS mopping up 40 percent of the market to Android's 26 percent and Symbian's 24 percent.

Despite what appears a straight three way fight, however, AdMob's numbers suggest it's Android that's the most likely to take on iPhone in the coming months, with its share having risen by around 22 percent across the course of the past twelve months.

In comparison, Symbian  which was just 13 percent behind iOS last May  has seen its share fall by around 10 percent, with a momentary perk in the last few months not enough to slip ahead of Android. 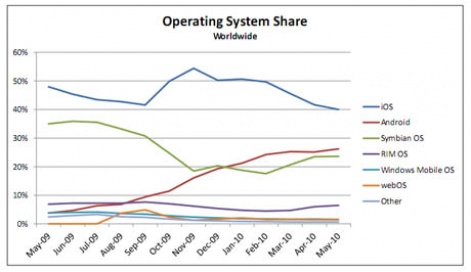 Google has much ground to make up to overtake iPhone however.

AdMob estimates Android's global userbase sits at 12.7 million units, with 66 percent of devices having been made in the US.

Way out ahead is iPhone, with a worldwide total of 29.3 million  AdMob's latest numbers generated a month before iPhone 4 sold an additional 1.7 million units in three days. 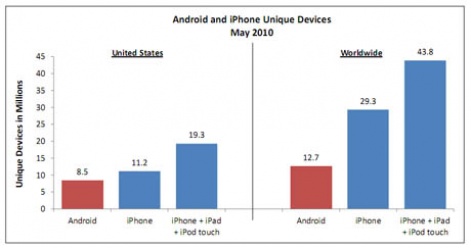 In total, iDevices have amassed sales of just under 44 million, outnumbering Android powered handsets by around 3.5 to 1.

The full report can be viewed on the firm's website, along with all the past reports.

Interestingly however, AdMob says it will stop issuing its metric reports for the next few months.

"We are going to take this time to think about how we can re-invent the report to make it more useful, powerful and relevant for the mobile ecosystem," it states, a decision no doubt affected by Apple's stance on thirdparty metrics and its proposed banning of the Google-owned ad network on iOS.