July 5th, 2010 - 05:07pm
By Keith Andrew
It would appear AppStoreHQ's estimates regarding cross-platform development may have been conservative.

That's according to a report published by Vision Mobile looking into mobile developer economics.

Its findings suggest most developers are more than happy to put their eggs in more than one basket, working on 2.8 different formats on average.

Android remains the firm favourite with most studios. 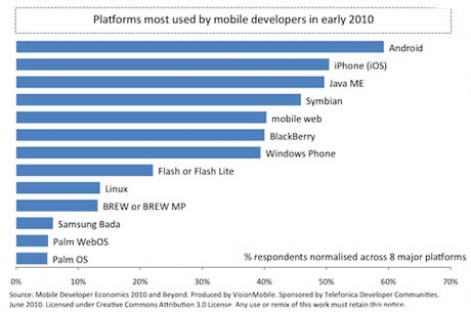 Interestingly, however, more than 75 percent of those surveyed claimed market penetration is the most important factor when choosing just what format to back.

That's despite the fact Android is yet to hold a market leading position in any major territory to date, with both BlackBerry and iPhone tending to outrank Google's platform in most smartphone markets around the globe.

Indeed, the report deduces there might be a fair amount of projection at play here, with backers of even fairly minor platforms claiming large market share is a priority. 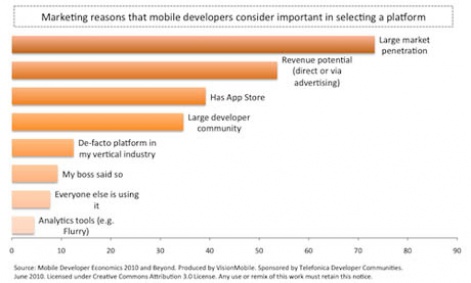 The firm's findings also suggest there's been a general cooling towards older platforms such as Windows Mobile and Java.

Microsoft, in particular, faces a struggle getting developers back on board for the forthcoming Windows Phone 7, with many developers stating they will "think twice" before investing in the platform.

Not that success is guaranteed on more stable formats, however.

Vision Mobile claims the money being made on app stores is being over-hyped, with only 5 percent of those surveyed reporting good revenues, and nearly 60 percent of iPhone developers revealing they've so far failed to reach their revenue targets on the platform.

You can read Vision Mobile's findings in full on the firm's website.