Smaller, lighter and with crisper text 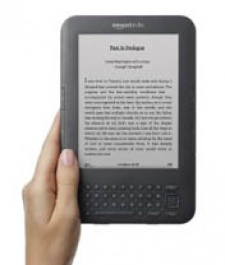 Both new devices, which can hold up to 3,500 books, are smaller and lighter than previous offerings, with the screen also displaying crisper text.

The more expensive of the two editions has been designed to replace the Kindle 2, retailing at the same price point of $189/£149.

The e-reader market has seen its prices tumble since iPad appeared on the scene in April.

Amazon, which launched Kindle for $399 back in 2007, slashed the price of the device from $259 to $189 back in June in response to a similar move made by rival Barnes & Noble, which currently sells its Nook e-reader for $199.

Interest in e-readers has not dropped off, however, with Amazon claiming Kindle sales tripled in the month following the last price-cut.

Indeed, it also says that for every 100 hardcover books sold, it's selling 143 Kindle books, with Swedish author Stieg Larsson the first to sell one million copies via the digital reader.

"The hardware business for us has been so successful that were going to continue," Amazon chief executive Jeffrey P. Bezos told the New York Times.

"At $139, if youre going to read by the pool, some people might spend more than that on a swimsuit and sunglasses. I predict there will be a 10th-generation and a 20th-generation Kindle. We're well-situated to be experts in purpose-built reading devices."

Both new editions will be available in the UK from August 27th.