Nielsen: Android outpaces iPhone in US in first six months of 2010

August 3rd, 2010 - 11:59am
By Keith Andrew
Apple might dominate the headlines  both good and bad  but it's Android that's now slipping ahead of iPhone in terms of sales according to the latest numbers from research firm Nielsen.

Though cumulatively Apple still has the lead  28 percent of the market to Android's 13 percent - Nielsen's numbers suggest Android has outpaced iPhone in the US in the first half of 2010, with 27 percent of consumers opting to pick handsets running Google's OS, 23 percent purchasing an iPhone.

Indeed, iPhone's assault on consumers' wallets appears to have peaked in Q4 2009, when the handset accounted for 34 percent of all new sales.

Since then its share of newcomers has fallen, with Android's growth having rocketed by 21 percent over the last two quarters  although these figures don't take July into account, which was iPhone 4's first full month on sale. 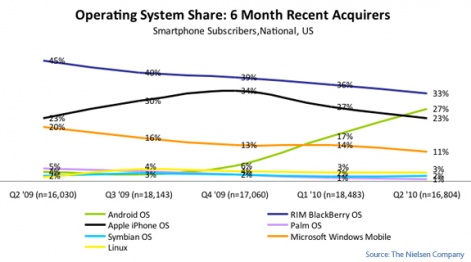 Nielsen's report paints a similar picture for BlackBerry, which  despite topping the chart for the last five quarters and accounting for 35 percent of the market  has seen its share of new sales slide by 12 percent since Q2 2009.
LA Times