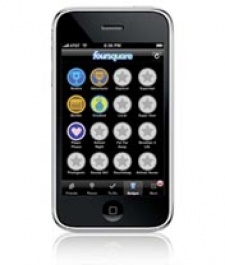 August 20th, 2010 - 11:53am
By Keith Andrew
The most optimistic of commentators might have believed Facebook's appearance on the location scene would benefit, rather than batter, existing LBS apps, but few could have thought it would cause their sign-ups to surge.

That's exactly what appears to have happened to Foursquare, however, with co-founder Dennis Crowley tweeting that yesterday was the service's biggest ever day in terms of new user sign-ups.

Users on the up

The news broke just hours after an interview with Crowley - in which he essentially dismisses the notion of Facebook taking over the location-based market - was published in the LA Times.

Crowley also reveals that Foursquare's worldwide userbase is currently just shy of 3 million, with the app signing up around 180,000 new users every ten days.

"[Facebook Places] is pretty much exactly what we thought it was going to be: A pretty simple check-in system that allows you to share your location with friends and do the standard sharing on Facebook," Crowley says in the interview.

"There were no real big surprises."

Enemy at the gate

Foursquare was, in fact, part of Facebook's big Places reveal earlier in the week, with the firm committing to making use of the API at some point in the future.

"We are playing with the Facebook Places feed internally," he adds in the interview.

"We're not sure when we will turn that on."

Despite such apparent indecision, Crowley claims Foursquare will ride the Facebook Places wave because it offers more than the social network's set-up.

Deals with brands that reward users with special offers are a particular trait of both Foursquare and rival Gowalla, for instance, and Crowley believes Facebook Places users will be tempted across the threshold when they sample what Foursquare has to offer.

Indeed, he goes on to compare Facebook's move into location to the social network's previous attempt to make its userfeed more like Twitter, stating that it only served to make Twitter stronger.

"Our services are totally different. They do different things, serve different needs and different people."

In truth, however, Facebook Places is more akin to Apple's decision to launch Game Center.

While both offer a platform of sorts for existing set-ups, you can be sure all the original players are taking steps to ensure their businesses survive any expected onslaught.