September 16th, 2010 - 09:30am
By Keith Andrew
There's no stopping Android in the US at the moment, with the latest numbers obtained via comScore's MobiLens venture suggesting the platform is continuing its 2010 sales charge.

With the likes of NPD already claiming Google's OS is outselling both iPhone and BlackBerry in the States, comScore's July figures paint a picture of a platform gaining major ground on its rivals.

Android now holds 17 percent of the total smartphone market, claims comScore, which puts Google in third place, some distance behind Apple on 23.8 percent and RIM with a market leading share of 39.3 percent.

However, while both BlackBerry and iPhone are actually losing smartphone share month by month  down 1.8 and 1.3 percent since April respectively, Android's slice of the cake continues to rise.

Google's share is up 5 percent in the last three months, in fact, and almost 10 percent since January. 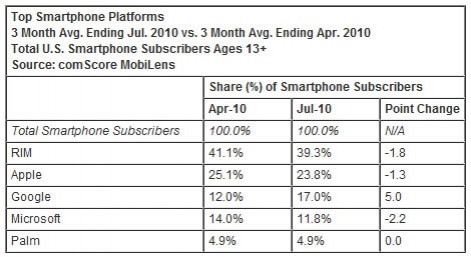 It's not a completely disatrous situation for Google's rivals, however.

Indeed, comScore notes that, with the total US smartphone userbase now sitting at 53.4 million, most platforms continue to see their subscriber base rise despite a loss in share.

Nonetheless, at this rate, Android will be neck and neck with iPhone by October.

Super SamsungThings are a touch more static when it comes to OEMs.

Samsung retains its market leading position according to July's figures, with its 23.1 percent share up 1 percent since April and just over 2 percent since the start of the year.

In contrast, Motorola's former dominance continues to fade away, with the firm  which lead the US market until April  seeing its share drop by 1.8 percent in the months since. 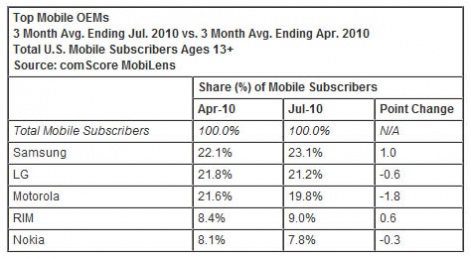